Litigation Is Not Your Only Option: Exploring Alternative Dispute Resolution

When a dispute arises between parties, it is common to hear someone proclaim, “I will see you in court!” Those words can strike fear in a person, because the thought of having to go through the litigation process 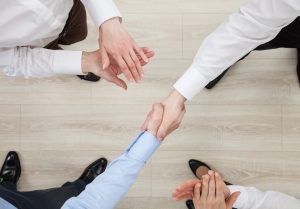 can be overwhelming and scary. Litigation is a complicated process with set rules and procedures that must be followed and sometimes can be difficult to navigate, especially when you are under the stress of a lawsuit. In addition, lawsuits can be very public and distressing to those who need or value privacy.

You can retain a lawyer to lead you through the legal process, but it can come at a large cost and it can be a bit like being in a foreign country without a good feel for the culture, rules, or language. Thus, litigation can be both monetarily and mentally draining.

The litigation process can involve large amounts of paperwork, numerous deadlines, and answering discovery via written documents or in depositions (sometimes of your friends, family, and co-workers); in the end, your case will be heard by a single judge or jury who will render a final determination based only on the information allowed to be presented in court by the rules of evidence. In other words, you will have no real control over the public outcome that will impact your life.

In recent years, alternative methods of resolving disputes have emerged and are referred to as “Alternative Dispute Resolution” (ADR). It is no surprise that people and companies have turned to these alternative methods due to the challenges that litigation presents. At present, the leading forms of ADR are Arbitration, Mediation, and Collaborative Law.

In some cases, a contract between the parties calls for arbitration in place of litigation and outlines the specific arbitrators who will be used. In other cases, each party chooses an arbitrator, and then the two chosen arbitrators pick a neutral third arbitrator. Sometimes the parties agree on one arbitrator to be used. However, in all cases the arbitrator is a neutral, third party who has more flexibility than a judge to determine the rules and procedures to be used during the arbitration and to determine what weight evidence will be given.

In mediation, a neutral, third-party mediator is chosen either by agreement of the parties or by the judge in the case. The parties may decide to have an attorney present to assist during the mediation. A mediator is like a coach for the parties—someone to help facilitate communication to get the parties to reach a mutually satisfying agreement. Although the mediator does not have the power to enforce an agreement, at the end of a successful mediation, the parties sign a contract that is given full force as a legal contract subject to enforcement if a breach of that contract occurs.

Mediation gives the benefit of privacy, as all discussions within mediation can be kept confidential if an agreement to do so is executed by all parties. In addition, mediation gives the parties control over the results, which can lead to a more successful outcome for the parties mentally, as all are invested and part of the process of resolution.

Collaborative Law is a process that enables parties to a dispute to attempt to resolve the dispute without resorting to litigation by reaching a settlement that meets their needs. The parties work together to try to reach an outcome upon which everyone can agree rather than taking the win-or-lose risk of court.

The collaborative process can be used to resolve a broad range of family issues, including divorcing couples, custody issues, disputes between parents, and the drawing up of pre- and postmarital contracts. Collaborative law can also be helpful in resolving business and real estate disputes.

The voluntary process is initiated when the parties sign a “participation agreement,” which is a contract that binds the parties to the process. The contract specifies that, should the process break down for any reason, the lawyers involved in the collaborative case will not be able to represent the parties in the ensuing litigation. In addition, the collaborative contract makes clear that each attorney holds his or her client accountable for providing all information requested by the other party truthfully and honestly and that failure to do so will result in a withdrawal of the attorney from the case.

In a collaborative case, each party has an attorney who acts not only as such party’s advocate, but also in a manner that facilitates cooperation among the parties. There is no need for discovery, as all information requested is given. The parties are encouraged to meet and have open discussions similar to mediation, but without a neutral third-party mediator. In addition, the parties may decide to bring in coaches to assist, such as mental health experts to help facilitate communication, child specialists who act as the advocates for the children impacted by the case, or financial advisors to help determine how best to divide assets.

In essence, the collaborative process gives parties the ability to be in control of the outcome of the case and have more information about the impact the decisions will have on the children and finances through the use of additional professionals acting in a neutral capacity. Once an agreement is reached, it is taken in front of a judge to obtain a formal court order to make the agreement enforceable.

If you are facing a dispute, litigation is not your only option. The above information is just an introduction to various forms of Alternative Dispute Resolution options that are available. For more information as to which option would be best for you, the attorneys in our Alternative Dispute Resolution group would be happy to discuss all of your options so you can make an informed decision.